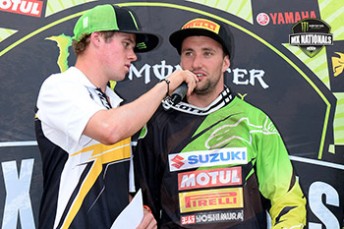 Matt Moss has beaten out his twin brother Jake to take the second round of the Monster Energy MX Nationals at Appin in South-Western Sydney.

In a rare display, Suzuki mounted Matt took both Moto wins, whilst Kawasaki rider Jake finished second. Third placing in both races fell the way of KTM’s Kirk Gibbs. The MX Nationals ran to a two by 30 minute Moto format at Appin.

Matt took the first race by over eight seconds from his brother. In the second Moto, the pair collided early in the event, however the Suzuki rider and favourite for the MX Nationals title this year recovered to take yet another dominant win.

Moss has elevated himself to the points lead by 20 over Gibbs. Gibbs had earlier set the pace during the Superpole qualifying session.

In an extremely tight MX2 category, Luke Clout was declared the victor, however just two points separated the top three riders at the end of proceedings. Serco Yamaha rider Clout took the first Moto victory, however dropped back to third in the final race of the day, clearing the path for Jay Wilson (also on a Serco Yamaha) to record a win.

Splitting the pair in the overall standings was Kale Makeham who took his KTM to two second place finishes.

Clout commandingly leads the Championship by 14 points over Hamish Harwood.

KTM pilot, Jack Simpson won the Pirelli MXD Under-19s category, whilst Mitchell Evans took out the Yamaha 125cc Junior Cup – the first time this category has made an appearance on the Monster Energy MX Nationals bill.

The next round is April 27 at Wonthaggi in Victoria.