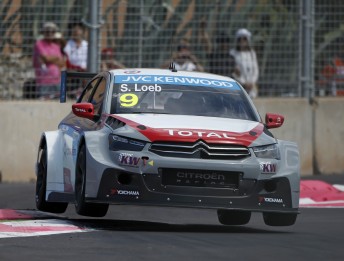 Loeb held third position once the race restarted before he quickly picked off Tiago Monteiro and Bennani for the lead.

The Citroen driver had to negotiate another Safety Car restart before he took the flag for his maiden touring car win from team-mate Jose Maria Lopez.

“This is more than I expected,” said Loeb. “To win race two from ninth on the grid. We tried to avoid the crash at the start, I was a bit lucky. I pushed hard to overtake and a victory is very good.”

Lopez won the opening race of the season as Citroen enjoyed an unprecedented 1-2-3 finish on their championship debut with Loeb second and Muller third.

After claiming pole position, the trio led the three hour race from lights-to-flag with the Sainteloc Audi R8 of Stephane Ortelli, Edward Sandstrom and Gregory Guilvert in second.

Will Stevens and Carlos Sainz Jr shared the spoils in the opening round of the Formula Renault 3.5 Championship at Monza.

British driver Stevens came through to record his maiden victory in race one as he led home Roberto Merhi and Pierre Gasly. The race was marred by an aerial crash caused by Marco Sorenson, who flipped on the start/finish straight after making contact with Jazeman Jaafar.

After finishing 18th in race one, Sainz Jr converted a pole position into a comfortable victory in race two from Marlon Stockinger and Sergey Sirotkin.

Chip Ganassi’s Scott Pruett and Memo Rojas held off a spirited charge from Wayne Taylor Racing to win on the streets of Long Beach.

Pruett and Rojas had led from the start in their Riley-Ford but were caught rapidly by the Corvette Daytona Prototype of Ricky and Jordan Taylor.

In the end just seven tenths of a second separated the pair at the flag.

Joao Barbosa and Christian Fittipaldi guide the Action Express Corvette to third while Jan Magnussen and Antonio Garcia secured victory in the GTLM class for Corvette.