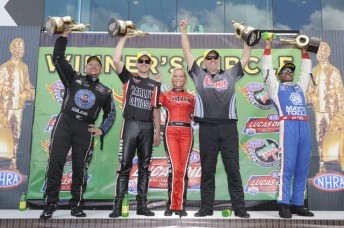 He is substituting for four time Champion, Greg Anderson and proved to be the ultimate super-sub as he defeated Shane Gray, Vincent Nobile, and Erica Enders-Stevens.

Robert Hight took out Funny Car – his second win of the season for John Force Racing and the first driver to record two 4-wide Nationals victories. He defeated ‘the boss’ John Force, who came home second with Alexis DeJoria and Tim Wilkerson rounding out the finishers.

In Top Fuel, Antron Brown took the win in the Matco Tools machine coming up against the powerhouse Al Anabi Racing machine of Shawn Langdon and the Kalitta Racing cars of J.R. Todd and Doug Kalitta. 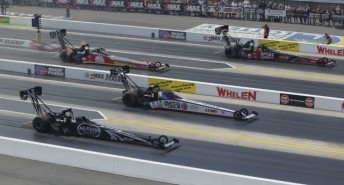 In Pro Stock Motorcycle, Andrew Hines staged a stunning turnaround. He’s never won a round at the 4-Wides and then went on to take victory, beating home Eddie Kraewic, John Hall and Scotty Pollachek for his 33rd career NHRA Mello Yello Series win.

The next round is at Royal Purple Raceway over the weekend of April 25-27 with the Spring Nationals.

Next Story International Round Up: Loeb records WTCC win