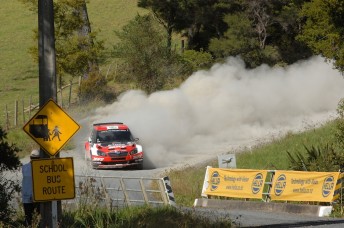 Gaurav Gill and Australian Glenn Macneall drove to a clean sweep of the six special stages to claim victory in the VINZ International Rally of Whangarei.

The pair took the win from the overnight leader and MRF Skoda team-mate Jan Kopecky.

Starting behind Kopecký for the day of double run stages, Gill was in a closely fought battle for stage honours, until the 32-year-old found advantage on the 27.43km Springfield test.

Pulling out a time 25s faster than his rival was all Gill needed to put his team-mate behind him for the run to the finish.

Defending the gain second time round, Gill added a further 1.1s to win by a competitive 11.9s after 220.87km of competition.

“We’ve come close to winning here before but every year we’ve had some issue either technical or mechanical,” Gill said.

“This time it was the best way to win – to come from the back, especially being down by 23s – it was a massive amount of time to make up in this situation.

“We had a really good fight all weekend so thanks a lot to Gaurav for that because you need to be pushed by an opponent to be able to improve,” Kopecky said.

Australian pairing Mark Pedder and Claire Dowling spent the majority of the event learning the intricacies of their Mitsubishi Lancer Evo X to finish third.

Australian Tom Wilde and co-driver Bill Hayes overtook the 4WD Skoda of China’s Jun Xu and Sheng Liu late in the day to claim fourth and we the first two-wheel-drive car home.

The chasing contingent of New Zealand competitors continued to be plagued by attrition – despite the continued fine autumn weather conditions.

In the first of six rounds for the 2014 Brian Green Property Group New Zealand Rally Championship (NZRC), only 13 of the original 26 finished the journey.

A further four in the Top Half Rally Series completed the full event.

Surviving their own catalogue of problems Masterton’s Richard and Sara Mason topped the list in a Subaru STi, finishing comfortably ahead of brother and sister team Matt and Nicole Summerfield in an earlier model Subaru.

The result puts the Mason’s, current defending champions, atop the NZRC standings.

Anthony Jones and Noel Moloney headed the list of local finishers in their Ford Escort.

International teams will now be spending much of the evening cleaning and packing their cars and equipment for shipping to the series second round.

Held in five weeks’ time at the Pacific island location of New Caledonia it uses 15 special stages situated between capital city Noumea and the international airport location of Tontoua.