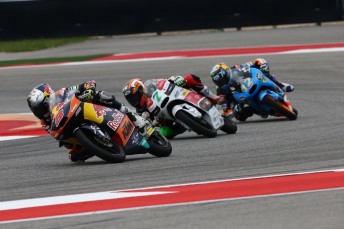 Jack Miller on his way to victory

Rising star Jack Miller claimed his second Moto3 victory of the season after a dominant display at the Circuit of the Americas.

The Queenslander led from lights-to-flag to become the first Australian to win back-to-back wins in the 125cc/Moto3 category.

Miller made no mistakes from his pole position starting berth as he led the field into the first corner.

His pace seemed to surprise the field as he quickly leapt into a healthy lead with Efren Vazquez the only rider to keep on his tail initially.

The Townsville rider came under pressure in the latter stages of the race but he held on to record his second win of the season by just 0.069 seconds. Romano Fenati came home in second with Vazquez in third.

“I don’t think we could have asked for a better race,” said Miller

“I was made to fight through to the end, but it was really good.

“Achieving a second consecutive win is amazing and I take my hat off to the team for the work they have done.

“We must continue in this way at each GP now. This will be very important throughout the year.”

Miller leads the Moto3 standings by 18 points as the series heads to Argentina for Round 3 on April 26-27.

*Stay with Speedcafe.com for all the latest motorcycle news.