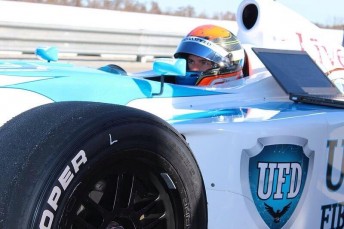 The 20-year-old son of Geoff, the eldest of Sir Jack Brabham’s sons, challenged for the lead in the early stages before settling for third and his first podium in only his second race in the category.

Brabham made a strong start which allowed him to draw alongside pole sitter Zach Veach and Chaves before tucking in behind the pair at the first corner. He distracted Veach enough to allow Chaves to take the lead.

Once in front, Chaves was in control as he quickly extended his advantage to two seconds before Veach closed the gap at the halfway stage.

Meanwhile, Brabham tried to haul the pair in but his progress was halted by a couple of close scrapes with the barriers.

In the end, there was no stopping Chaves as he took the victory from Veach with Brabham three seconds adrift in third.