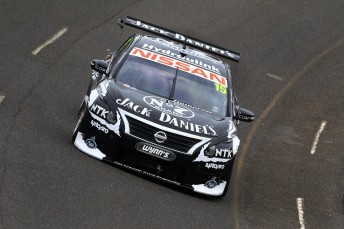 Rick Kelly at speed on the Thunderdome

Rick Kelly has become the first driver to turn laps at a proper oval track in a V8 Supercar after taking his Nissan Altima around the Calder Park Thunderdome in Melbourne.

The Jack Daniel’s Racing driver took his car inside the dome after a corporate ride day at the raceway across the carpark. 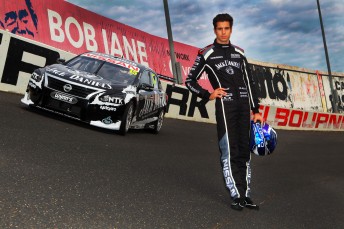 Kelly and the Altima on the 24-degree banking

“I’ve always had a little bit of a dream of doing this, probably not in a V8 Supercar, but in a NASCAR, and I can tell you, in the V8 Supercar it’s a lot of fun,” said Rick Kelly.

“We only did a handful of laps not at fantastic speed, but it was enough to get a feel of what an oval is like, and the amount of banking here at Calder Park is really quite impressive.

“The grip mid-corner is unbelievable with that banking, I never got close to the limit, but I’d imagine if you overstepped it, you would be up into the wall pretty quickly.”

The trial on the 24-degree banked 1.8km long oval has reignited debate on whether V8 Supercars could stage a race on a banked oval track; most notably in the USA or Europe.

The chances of actually running at the Thunderdome are next to none, as the facility would require a massive amount of work to the track and surrounds after no proper racing since the late 1990s.

“It would take a bit of tuning for sure to get the V8 Supercar to handle to its capability, but Calder hasn’t been used in many years, there are weeds growing up through the grandstand, and the track is very, very bumpy,” said Kelly.

Calder’s history as a road and oval venue even included a round of the World Touring Car Championship in 1987 which used a combination of both tracks totalling 4.216km in length.

Next Story Jones: Ricciardo has justified Red Bull call up