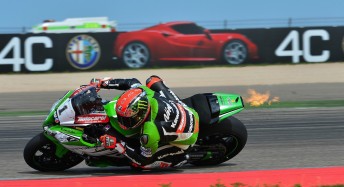 Reigning champion Tom Sykes will start from pole position in second round of the World Superbike Championship at Spain’s Motorland Aragon circuit.

The Brit pipped his Kawasaki team-mate Loris Baz to the all important pole by just two tenths of a second with a last gap effort in the dying minutes of Superpole 2.

Ducati appeared to have the pace to secure pole with Chaz Davies after an impressive start to the final qualifying session. However, the Welshman ruined his chances with a costly fall and will subsequently start Sunday’s races from sixth.

Davies will start just ahead of Aprilia’s Marco Melandri with half a second separating the top seven riders.

The Crescent Suzuki’s of Eugene Laverty and Alex Lowes struggled for outright pace as the pair secured eighth and ninth spots on the grid respectively.

Toni Elias rounded out the top 10 just ahead of Leon Camier on his return to the championship as a replacement for BMW’s injured Sylvain Barrier.

Pata Honda’s Leon Haslam also suffered a fall in the session but luckily he escaped without injury.

*Stay with Speedcafe.com for all the latest World Superbikes news.