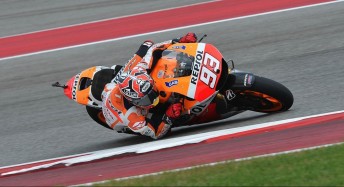 Marc Marquez on his way to pole position

Honda’s Marc Marquez smashed his previous Circuit of the Americas lap record on the way to securing a second MotoGP pole position of the season.

Despite an ongoing recovery from a broken leg, the reigning world champion proved to be in a league of his own as he dominated qualifying from start to finish.

His blistering 2.02.773s effort broke his existing lap record by two tenths of a second leaving the rest of the field struggling to match his pace.

Aleix Espargaro continued to turn heads as he was fourth fastest on his Open Class Forward Yamaha ahead of the works Yamaha duo of Jorge Lorenzo and Valentino Rossi respectively.

Ducati’s Cal Crutchow enjoyed his best showing for his new team by posting the seventh fastest time but he was a second adrift of pole man Marquez.

Australia’s Broc Parkes will start from 21st on the grid for Paul Bird Motorsport.

In Moto3, Queensland’s Jack Miller stormed to his maiden pole position in the category after a dominant display in qualifying.

The 19-year-old from Townsville, who won the opening round of the championship in Qatar, was a full three tenths of a second quicker than his closest challenger Efren Vazquez.

“It’s nice to start from pole position but the main focus of the weekend is to have a good race tomorrow,” said Miller

“In every session we were able to get more comfortable with the bike and found better settings.

“We have a good setup for the race, but we have to continue working tomorrow morning and we’ll see where we end up.”

*Stay with Speedcafe.com for all the latest news from MotoGP