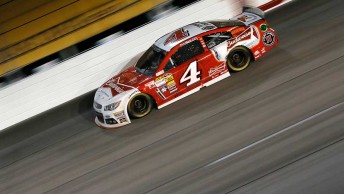 Harvick on his way to victory at Darlington

Kevin Harvick has hit back in the NASCAR Sprint Cup Series with victory in the Bojangle’s Southern 500 at Darlington South Carolina.

Harvick is the first driver to win twice in 2014, after taking victory in the second race of the season at Phoenix. It guarantees him a place in the Chase for Cup.

After his win in Phoenix, Harvick had been on a horror-run of finishing 36th or worse in four of the last five races. Today’s result came after he scored pole at ‘The Track Too Tough To Tame’, making him the first winner from the point since 1997 at the Southern 500.

Harvick was in the mix throughout the entire race as multiple cautions periods were called as cars continually found the fence and earn a ‘Darlington Stripe’. As others tried two-tyre strategies, Harvick kept to his plan of four fresh Goodyear Tyres and appeared to be on the money ahead of Jimmie Johnson when the final round of green flag pit stops occurred with around 40 laps to run.

Then a caution with less than 10 laps to run brought the leaders to pit road, where a number of drivers took two tyres. Harvick stuck to his guns and took four tyres to line-up fifth as Johnson held the lead. On the following re-start he moved up the order to third before another yellow was waved. The first attempt at a green-white-chequered finish saw another yellow flag when Kurt Busch was turned around in the back-stretch. This meant Harvick started alongside Dale Earnhardt Jr. for what would be the final re-start and his superior grip propelled him to the front and he took the victory.

Marcos Ambrose started fourth, but very quickly had a battle on his hands with a car that lacked grip. During the opening hour of the race in sunlight, Ambrose faded back to 20th, as his crew tried a range of adjustments. The car seemed to come to life on the short runs, but as the track conditions changed he was slipping off the pace of those around him.

At one stage the Tasmanian was two laps down before the car came to him. Fast driving and staying out during caution periods soon had Ambrose back on the lead lap with 100 laps to run. He looked settled for a 20th place finish, but the late caution allowed four fresh tyres and a big adjustment swing which vaulted him another six places at the finish.

“A lot of guys had really loose race cars and this drove so much different than what it did in practice,” said Ambrose.

“We had a 20th place race car and finished 14th with it. It is a good points night and we will keep chipping away.

“It is a lot of positives for us from the weekend with good qualifying on Friday. We just have to work out how to make these cars run when the tape comes off the nose. All in all, not a bad weekend.”

Ambrose exhausted after battling throughout the entire 500 mile race on a slick track.

“From the first lap is was slick as anything,” said Ambrose.

“This is the most worn out I have been in my NASCAR career. I think it just wore it out. I am pleased we finished and got back up on the lead lap.”

NASCAR has one of its rare weekend’s off now for the Easter Break before regrouping in Richmond for another Saturday night race on 26 April.