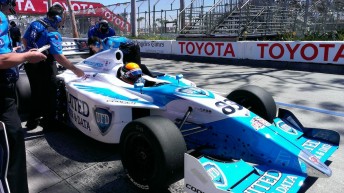 Matthew Brabham will start from third on the grid

Matthew Brabham will start his second Indy Lights race from third position after narrowly missing out on pole position at the famous Long Beach street course.

The 20-year-old son of Geoff, the eldest of Sir Jack Brabham’s sons, made the most of the dying minutes of the session to elevate himself to third, just six hundredths of a second adrift of  pole man Zach Veach.

Frenchman Alex Baron held provisional pole for the majority of the session before he pitted with 30 seconds remaining believing he had done enough.

However, as chequered flag flew Andretti Autosport’s Veach came through to snatch pole with a 1.15.0074s. He was followed by Gabby Chaves and Brabham with the trio separated by just 0.0618s.