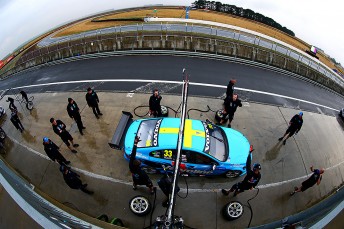 Category chief executive James Warburton said V8 Supercars is looking at a number of directions as it strives to restore financial team returns which have depleted to non-measurable levels.

Discussions over trimming some meetings back to two-day events have been tabled but no decision has been made on what modifications, if any, will be made.

Two-day meetings came back into focus when V8 Supercars announced significant cut-backs to practice for specified 2014 events ahead of the Symmons Plains round last month.

“What we saw at Symmons Plains at the first event, there was an absolute flurry (of activity).

“It was pretty entertaining I thought. It’s a matter of looking through that.

“Clearly the focus with the business is with restoring the dividend to historical levels.”

Warburton said there was a lot to consider in the wake of the new media rights deal between Foxtel, Fox Sports and the Ten Network.

Fox intends to screen every minute of practice, qualifying, support categories and the V8 championship races live and in high definition.

“There’s an enormous amount planned for the early end of the weekend in terms of Fox Sports coverage in particular which comes in a day before, sometimes two days before the free-to-air currently, so there’s a lot to consider from 2015 and beyond,” Warburton explained.

“It’s not just about on-track action. There’s a lot of it about continuity of pre-round, shows and post round shows and motorsport 360-type shows, so its actually about the platform.”

“It’s not just about cars practicing on the track.

“It’s about the whole ethos of the sport and the drivers the teams and a lot of the activity and action which clearly the fans are interested in as well.”

“International events and the like are a completely different beast to Australian based events and how that actually shapes in the diary as well.

“So there’s a lot to consider before we get there.”

The forthcoming ITM 500 Auckland at Pukekohe over the ANZAC day is not affected by the Friday cut-backs and runs under a completely different set of guidelines under its existing contract.

That event will see Friday activity start on April 25 with one 30 minute practice, a 20 minute qualifying followed by the opening 35-lap (100km) Race 10.