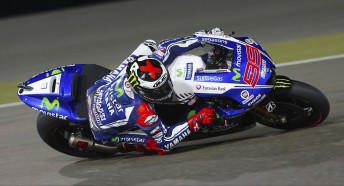 Jorge Lorenzo is not ruling out a move to another MotoGP manufacturer while he ponders signing a new contract with Yamaha.

The two-time MotoGP world champion, who is out of contract at the end of the season, has revealed talks have begun regarding a new deal with Yamaha ahead of this weekend’s Grand Prix of the Americas.

Lorenzo’s two MotoGP titles were secured while racing for the works Yamaha team, which he has been a part of for his entire top flight MotoGP career.

“We have started talking and have had the first meeting,” Lorenzo told motogp.com.

“The more ideal thing would be to stay with Yamaha and not change to another factory. Obviously, we are here to try to win and the bike is very important.

“I have always had a very good bike, because I have finished either first or second for the last five seasons which means that the bike was working very, very well.

“If the bike can improve a little bit more, and Yamaha can offer to Valentino (Rossi) and myself a better bike, it would be much easier to sign up again for another two years.”

Ideally a new contract with Yamaha is Lorenzo’s first option but the Spaniard has admitted he could be persuaded to leave the firm and join another manufacturer.

“I think every rider, if they receive offers, check out those offers – you would be mad not to check them out,” added Lorenzo.

“But, obviously, if things are good with your factory and they treat you well – as Yamaha always has with me – and the bike is competitive, the most logical thing is to sign up again.

“Let’s see what happens. The top three or four strongest riders always receive offers from all of the factories, so I guess the same thing will happen again this time.”

Lorenzo will be eager to kick start his season at the Circuit of the Americas this weekend after crashing out of the MotoGP season opener at Qatar last month.

*Stay with Speedcafe.com for all the latest motorcycle news from across the world