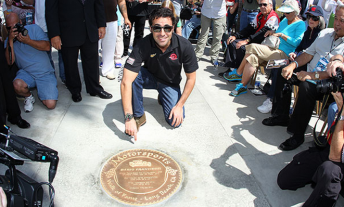 Retired IndyCar racer Dario Franchitti has been inducted in the Long Beach Motorsports Walk of Fame.

As the Long Beach Grand Prix celebrates its 40th running this weekend, Franchitti has been honoured in a special ceremony headed by the mayor Bob Foster.

“I’m going to put this in what we call in Scotland the ‘I love me room,’ ” Franchitti said.

“It’s a real privilege to be inducted. It’s a place that I’ve enjoyed coming to and a track that I’ve really enjoyed racing on.

“I got my first (IndyCar) podium here way back in in 1998 when I finished second to Alex Zanardi, which seemed to happen quite a lot.

“I won my first race here for Target Chip Ganassi Racing in 2009, so it’s a place with great memories.”

That team took Toowoomba’s Will Power to victory in the race in 2008.

The three-time Long Beach winner Sebastien Bourdais will drive the #11 KVSH at the 40th annual Toyota Grand Prix of Long Beach this weekend.

“To be in the company of Jimmy and (2008 honoree) Parnelli (Jones) and Dario is an honor,” expat Aussie Kalkhoven said.

“It really irritated me that Jimmy got in first because we’re desperately competitive.

“ I’m sure some places will be serving his wine during this event, and I can assure you that mine is still better. At least that’s my theory.”

Kalkhoven and Forsythe purchased the Grand Prix Association of Long Beach in 2005.