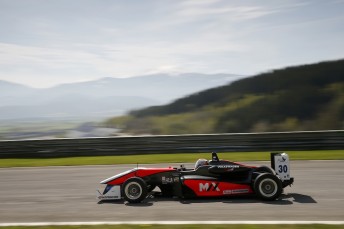 The 16-year-old, son of former F1 driver Jos Verstappen, set an impressive benchmark of as the Dutchman prepares for his first full season of car racing after starring in karts.

Verstappen, driving for Van Amersfoort, set a best time of 1:23.690 at the 5.9km circuit, a full two tenths of a second quicker than Carlin’s Swedish import Tom Blomqvist.

Aussie Gilbert showed encouraging signs ahead of his second campaign in the series by posting the ninth quickest time for British F3 giant, Fortec Motorsport.

The 19-year-old, who finished 23rd in the standings last season, is eager to showcase his skills this year after a difficult rookie season.

“Last year isn’t really a reflection of what I can do, so now we think I can surprise a few people during the season,” said Gilbert.

“This isn’t a new start, but I’m looking at it as a turning point. I can’t wait to show what I can do again.”

Fellow Australian Spike Goddard was 22nd in the field of 27 cars, driving for British outfit T-Sport.

The FIA European F3 season kick off at Silverstone on April 18-19.