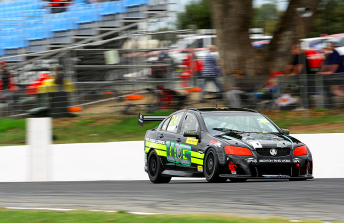 Tim Macrow drove the first of Gallagher’s Holdens at Winton

New Dunlop Series outfit Gallagher Motorsport already has its eyes on a progression into the V8 Supercars Championship as part of an ambitious project backed by Melbourne-based entrepreneur Tony Klein.

The squad made a modest debut in the second-tier class at Winton last weekend, with its ex-PWR Holden providing a litany of mechanical troubles for series debutant Tim Macrow.

The event marked merely the first step, however, in Klein’s plan to develop a multi-tiered motorsport training program that could one day stretch all the way to the main series.

Klein sees motorsport as the next expansion opportunity for his Training Institute of Australia, which currently operates as part of the Klein Corporation’s wider business group that also includes interests in property, hospitality, horse racing, animation and video gaming.

The structure of the racing effort is said to include a government funding component alongside Klein’s investment.

“We’ve been doing it for 12 years very successfully in other industries and I think this industry needs it more than any other,” Klein told Speedcafe.com of his training plans, which will take place under the Dragon Motor Racing banner.

“I’m pretty confident that we’ll do well. The next two years will be about learning and then after that it will get more serious with the racing side.”

The current-spec vehicles are also understood to be coming from GRM, which built two new cars for this year under its new Volvo Polestar Racing guise.

Klein’s racing effort is being headed by motorsport veteran Denis Gallagher, who has assembled a crew of mainly ex-Minda Motorsport staff to run the Dunlop Series team.

Klein had worked for Gallagher’s computing business after graduating from college, and a chance meeting late last year while the former was assessing a move into motorsport triggered the new association.

“Our main focus is to create a career path for drivers, engineers, mechanics and so on, developing a training structure around the whole commercial model,” Gallagher told Speedcafe.com.

“(Eventually) we’ll go from karting all the way through to Formula Ford, Formula 3 and the Dunlop Series.

“Depending on how we go we’ll try and get into the main series in a couple of years time when we’ve learnt what it’s all about.”

For now, the team is set to sit-out the next round of the Dunlop Series at Barbagallo before returning with the ex-Minda GRM Holden in Townsville.

Although unsure when it will take delivery of the COTF units, Gallagher says that the cars will be used as part of the training efforts ahead of track running in 2016, most likely in the Dunlop Series.

“Having those cars will give us a year and a half to understand the them and how they work,” he said.

“Then by the time we go racing with them, hopefully we’ll be ahead of those guys just getting the cars.”