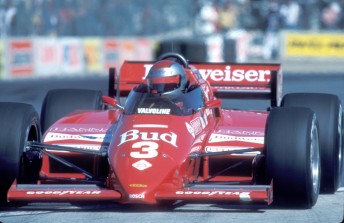 In the fourth of a five-part series celebrating this year’s 40th running of the Long Beach Grand Prix, we look at how Mario Andretti kicked off a new era for the race

During the 1983 United States Grand Prix West, won by John Watson, speculation regarding F1’s future at the venue was rife.

Shortly after Watson’s triumph for McLaren, Pook made the call to cut ties with F1 after eight hugely successful Grands Prix.

Instead, he opted to sign a deal with the American CART/IndyCar series for the 1984 event, after being approached by several teams.

CART (Championship Auto Racing Teams) had been steadily on the rise in America with the likes of former F1 world champions Andretti and Emerson Fittipaldi joining the championship.

Pook felt that the reduced cost to host a CART event and its increased fan base on home soil outweighed the expensive yet glamorous world of F1.

Ditching F1 for CART was a huge risk and come race day in 1984 a section of the crowd voted with their feet.

Attendance figures were down by 30,000 but the 55,000 spectators, who embraced the new era were rewarded with an iconic moment in American motorsport.

Already embedded into Long Beach GP folklore after winning the 1977 F1 race, Andretti was required to showcase his skills to help the event navigate a potentially tricky path following its big switch from F1.

The 1978 F1 world champion read Pook’s script perfectly as he stormed to pole position driving for the Newman/Haas team just ahead of Derek Daly.

Andretti then dominated the race from lights-to-flag as he successfully negotiated the Long Beach streets in front of a passionate partisan crowd.

The Italian-American was never troubled throughout the 112-lap distance as he became the first two-time winner of the race and the only man to win the event in both F1 and IndyCar guises.

“It’s rare that a victory comes this easy so I will enjoy it,” Andretti said at the time.

“We worked out who the contenders would be and once we found out the car was perfect and I felt I could really handle it.

“It was a perfect afternoon.

“I have always felt I had the support here.”

In a dramatic final lap, Australian Geoff Brabham, the eldest son of triple F1 world champion Jack Brabham, spluttered over the finish line to secure second, after his Kraco March ran out of fuel.

“It was close I was really lucky,” said Brabham after his gutsy drive.

“The engine wasn’t really going at all so I had to drive really hard in the corners to try and make up for it.”

Andretti’s triumph grabbed the headlines yet again ensuring a successful switch from F1.

As a result, the Grand Prix of Long Beach has gone on to become part of the very fabric of IndyCar ever since.

“We weren’t exactly sure if the Champ Cars would have the same mystique for race fans,” said President and CEO of the Grand Prix Association of Long Beach Jim Michaelian.