Home » News » Bikes » Development gains for Honda ahead of Aragon

Development gains for Honda ahead of Aragon 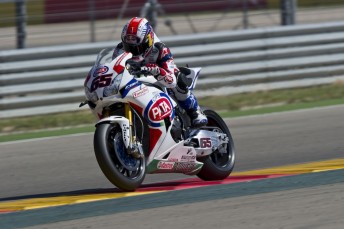 Jonathan Rea and Leon Haslam are confident of making progress following two rounds of development testing on their respective Hondas.

The Pata pair completed tests at Cartagena and Jerez ahead of round two of the World Superbike Championship at Aragon this weekend.

The team has concentrated on revised electronics and new components on the CBR1000RR Fireblade SP machines.

The championship resumes after a long break since the opening round at Phillip Island in February when Eugene Laverty and Sylvain Guintoli shared wins.

Rea was sixth and fifth while Haslam recovered after a non-finish in the opening Phillip Island race to finish sixth.

“Since Phillip Island, we’ve had some software updates and some new chassis components that we were waiting on so we’re in a much better position to go racing,” Rea said.

“Aragon’s long straight might not suit the bike quite as well as it suits others, but the circuit needs a good all-round package which we definitely have with the new CBR.”

See below World Superbike top 10 standings after 1 round