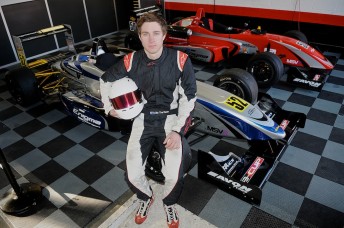 Rae is competing in Britain’s F3 Cup championship and joins a selection of rising stars in the program run by the Formula 1 squad which aims to develop young racing drivers.

The scheme offers a group of 18 drivers the use of the team’s state-of-the-art McLaren Technology Centre as a base, while undergoing a series of training sessions geared to improve all aspects of being a professional driver.

Through a range of methods, the academy aims to improve drivers’ physical/mental fitness, nutrition and racecraft.

After leaving Australia in 2011 to pursue a motor racing career in Europe, the former karter and British Formula Ford racer is keen to make the most of the opportunity.

Like Red Bull’s emerging F1 talent Daniel Ricciardo, Rae is from Western Australia and is following a similar career path.

“Basically I have been given insight and specialised advice on stepping up into becoming a world class racer,” Rae told Speedcafe.com.

“All facilities at McLaren have been opened up for myself and it has given me a great kick start for 2014.

“This program ensures I am doing everything I can daily to optimize and keep on track with becoming a world class racer.”

The McLaren Performance Academy will continue to monitor Rae’s progress throughout the year.

After a solid 2013 campaign, the 23-year-old is targeting a tilt at the F3 Cup title this season with Enigma Motorsport in a bid to continue his journey through the lower formulas.

The Aussie revealed he is eyeing a move to World Series by Renault for the 2015 season.

“GP3 and FIA F3 would be great but I think I would benefit greater from World Series having competed this year in the Formula 3 car.”