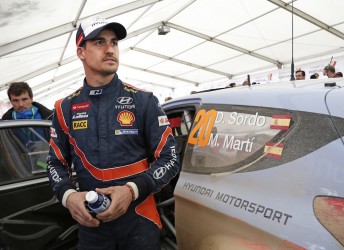 Hyundai’s World Rally Team has ordered a belated driver switch to its campaign ahead of Rally Argentina with Dani Sordo nominated as a last minute inclusion.

Originally Hyundai announced that Juho Hanninen would take charge of the #8 i20 however the team was compelled to change tact after Sordo’s impressive stage wins in Portugal last weekend.

Hanninen will now only take part in the recce in Argentina ahead of getting back behind the wheel in competition for the Rally d’Italia Sardegna from June 5-8.

Hyundai will not run its third car in Argentina owing to the tight time scale of travelling to South America.

Michel Nandan, Hyundai team principal said: “We felt that it was fair to give Dani a second consecutive rally participation following his excellent performance in Portugal.”

“We had wanted to add a third car to our existing two-car entry but it proved logistically and practically impossible given the tight timescales and the required repairs to the car from the last rally.”

Sordo compiled a couple of stage wins, the first for the i20 WRC, and was occupying fourth position overall before a broken driveshaft forced his retirement in Portugal.

Next Story VIDEO: Ken Block takes on the round ball game