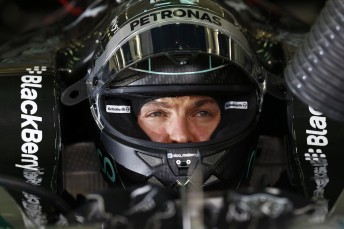 Nico Rosberg completed a highly productive set-up evaluation for Mercedes by setting the fastest time in the first of a two-day official Formula One test at the Bahrain circuit.

Rosberg accumulated 121 laps during the day to record a best time of 1:35.697s as the German driver handled the driving duties exclusively for the team before Lewis Hamilton takes over on day two.

The emerging presence of Force India, fresh from only its second ever podium last weekend at the Sakhir International Circuit, saw Nico Hulkenberg finish second fastest with a 1:36.064s.

Kevin Magnussen, who is charged with doing all of the McLaren testing over the two days, was fourth, fractionally behind Alonso with Valtteri Bottas (Williams) in fifth.

Rosberg said that Mercedes had managed to strike a solid and reliable base with the hybrid system.

“Our main aim today was to try different directions with set-up and to get to know the tyres a bit better,” Rosberg said.

“You never stop learning how to get the best out of the tyres, so it has been a productive day from that perspective.

“We also did a bit of work on the brakes as this is an area I’m not one hundred percent happy with at the moment.

“Reliability, car performance, Power Unit performance: it’s all there and it’s a pleasure to be a part of a team with such positive momentum.”

Rob Smedley, head of vehicle performance at Williams, said the team had been encouraged by the results of the test which saw Bottas complete 28 laps.

“We had good mix of tests today with aero, mechanical, car set-up, electronics and power unit, and we managed to get through everything which is hugely encouraging,” Smedley said.

“The results were very positive and we collected a lot of good data, which is good news.

GP2 driver Felipe Nasr will step in for the final day of tests as Williams completes a 2015 tyre test program for Pirelli.

See below times from Day 1 of Bahrain F1 tests