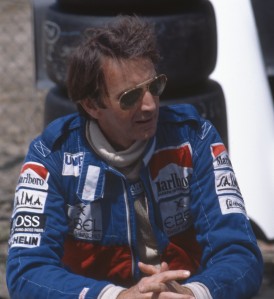 In the third of a five-part series celebrating this year’s 40th running of the Long Beach Grand Prix, we look at the record John Watson set in 1983 which still stands.

Long Beach is forever etched in John Watson’s mind as he not only successfully took on his world champion team-mate Niki Lauda, he did so by setting a fresh Formula One mark.

The Northern Irishman produced one of the drives of his career in the final F1 race on the Californian streets in 1983, as he came from 22nd on the grid to take victory.

The result remains a record as the lowest starting grid position for a Grand Prix winner.

It would prove to be McLaren’s only victory of the season as the Woking-based team’s entries for Watson and two-time world champion Lauda lagged behind the new turbo powered machines taking over the sport.

However, Long Beach provided a rare moment where the turbo cars struggled and the McLarens came to the fore.

But it would have a taken a brave or foolish person to have placed a bet on Watson after qualifying.

The McLaren team struggled to get heat into the tyres compared to their turbo counterparts, which left Watson 22nd and Lauda 23rd on the grid, a full four seconds off the Ferraris of Patrick Tambay and Rene Arnoux.

“It was a funny old weekend because we were not competitive in qualifying and the reason for that was quite simple,” Watson told Speedcafe.com.

“The tyres we ran were Michelin and they had more or less been developed to suit the turbo cars so we struggled to get energy into the tyre for qualifying. 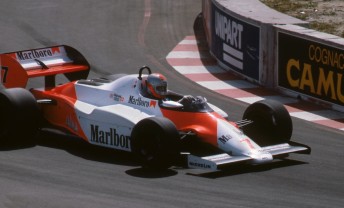 Watson on the streets of Long Beach

“The turbo cars were able to get heat into the tyre quickly so the tyre was skidding across the surface of the track for us.”

As the voice of F1, Murray Walker once said, “Anything can happen in F1 and it usually does.”

On this occasion those words were more than justified, as Watson’s McLaren was transformed into a race winner under sunny Long Beach skies.

Tambay held the lead at the end of the opening lap followed by the Williams duo of Keke Rosberg and Jacques Laffite with Anoux in fourth.

Meanwhile behind Lauda, Watson made rapid progress through the field.

By lap 28 the pair found themselves in third and fourth, aided by a spin from Rosberg and leader Tambay.

“Come the race with all the race fuel on board, the additional weight put energy into the tyre which allowed the car to come alive,” added Watson.

At quarter distance Lauda and Watson had surged to the front with the Austrian leading the race.

However, unsatisfied with a finish behind his team-mate, Watson who had shown he was quicker, went for the lead.

“A quarter of the way through the race we were leading with Niki first and me second,” Watson recalled.

“I felt I had a chance to win the race so I made a very audacious move down the inside into the hairpin at turn 1.

“Niki was like; ‘what did you do that for?’. But I got the lead and that was it. I got the win and it was great day for the team.

“It was a bold decision to overtake him but it worked out.

“While we started at the back, I didn’t anticipate we would win the race and the way we made progress through the field was incredible.”

While Watson basked in the glory of what was one of the finest victories of his career, the fairytale story didn’t end there.

The Ulsterman returned to the McLaren factory to an argument with designer John Barnard.

“Ironically when we got back to England I went to the McLaren factory and Ron Dennis came up to me and said, ‘You’ve done it this time John, you have really upset John Barnard because you have taken credit for the decision to go with tyres you ran’.”

“Apparently in the press conference I was asked ‘Which tyres did you run?’, and I said that I chose the 05 (Michelin), not John, and that pissed him off very much.

“But it was a great weekend nonetheless.

“It was a very nice win because there is a long story behind it.”

*Tomorrow: Long Beach welcomes a new era of racing when it switches to homegrown IndyCar racing