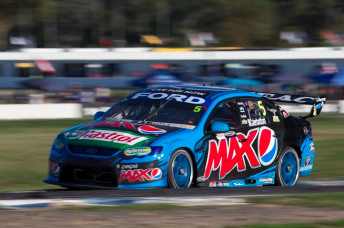 A drought-breaking win on Sunday must not distract Ford Performance Racing from efforts to improve its Falcon package over the coming months, stresses Mark Winterbottom.

The Winton 400 finale saw Winterbottom return the factory Ford team to the top of the podium for the first time since Bathurst last October.

Following an off-season that included the departure of Winterbottom’s engineer James Small and team-mate Will Davison, the four-car squad has enjoyed a mixed start to its campaign.

The struggles, largely with qualifying speed, have seen the team dovetail its own development efforts with a push for homologation upgrades from V8 Supercars.

Winterbottom now sits second in the standings to Red Bull Holden driver Craig Lowndes after his victory, but warns that FPR must not become complacent with the success.

“At Winton you can get away with it a little bit, but some other tracks are definitely going to be hard,” he told Speedcafe.com of his car’s deficiencies.

“We can’t back off. We’re doing a good job of maximising what we’ve got, but we’ve got to keep pushing.

“Other tracks like New Zealand and Perth could potentially be quite tough for us, so they’ve got to keep pushing for what they’re doing.

“There are deficiencies in areas of the car. We need to make sure we fix it.”

Winton saw Winterbottom turn qualifying efforts of 24th, sixth and fourth into a seventh, a second and a first in the respective races.

Tyre life, meanwhile, was an undoubted strength for the Ford at the rural Victorian venue.

“We’re struggling with qualifying speed and we don’t know why,” he said.

“It’s bizarre because one of my strengths is qualifying and in one of the sessions we were 24th.

“We’re just not getting the most out of the tyre and whenever you are in that situation, the tyres are going to last longer. It’s a catch-22.

“We’ve got to tune up our qualifying because if we can get on the front-row, I think we’ll always race quite well.”

Winterbottom refuted any suggestion that previous testing experience at the venue had helped FPR and fellow Victorian squad Brad Jones Racing in dealing with the changing track conditions at Winton.

FPR is scheduled to undertake its first private test day of the year following mid-May’s fifth event of the season at Barbagallo.

For now, Winterbottom says his team will simply have to make the most of its current pacakge and any mistakes from its rivals.

“Red Bull has a bad weekend once in a blue moon,” he said of the Lowndes and Jamie Whincup driven Holdens, which endured an uncharacteristically poor meeting at Winton.

“We don’t always capitalise on that but this time we actually did, which is good. But we know that next round they’ll come out and be back up the front.

“One bad round and you’re down 100 points. It can slip away really quickly.

“We need to get new bits in the car to go quicker. It’s hard work at the moment but we’re hanging in there with what we’ve got.”