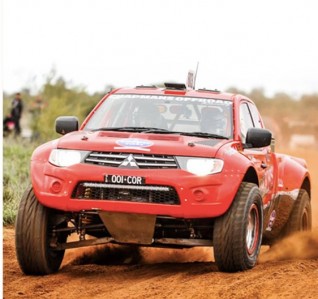 Australian model Kate Peck will join the Chapmans team as guest navigator for round one of the Australian Off Road Championship at Kalgoorlie from April 18-20.

Peck will compete alongside driver Clayton Chapman in the #871 Mitsubishi Triton (Extreme 4WD) as part of a new adventure television series.

The avid motorsports fan will replace regular navigator Adam McGuire, who has been team-mate with Chapman for the last six years.

“Adam’s excited that we have this opportunity, but I told him he’s going to have to brush up his appearance for round two because it will be hard to follow Kate,” Chapman joked.

In a new television production called A Model Adventure, Peck who is currently Myer’s national youth ambassador, will push herself to the limit, physically and mentally, in various gruelling adventures. “I’ve seen a few videos of Kate and she’s definitely got the right attitude, she’s a fun person, she doesn’t back down easily when given a challenge, and those sorts of traits are what you need to have in a race car,” Chapman said.

“It is a new racing circuit for us at Kalgoorlie, and the navigator does play a huge role in the car beside me, so it won’t be a walk in the park to get up to speed.

Filmed by Candid Films for National Geographic Channel, A Model Adventure will begin airing in July 2014.

McGuire will return to his regular navigator role aboard the #871 Triton at round two of the Championship, the Tatts Finke Desert Race (June 6-9).

Previous Story Peugeot to return to Dakar after 25 year hiatus