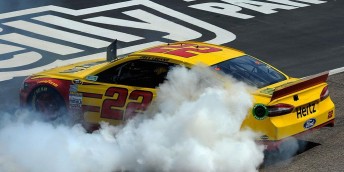 The Penske driver dominated the second half of the Duck Commander 500 at Texas Motor Speedway and was cruising to a victory when a final caution flag flew with a lap and a half remaining to set up a green-white-chequered finish.

Logano took four tyres and emerged in third place behind Jeff Gordon and Brian Vickers; both of whom took right-side rubber only. After the re-start he swept past Gordon entering the first turn of the last lap and became the seventh different winner of the seven races so far contested this season.

“It feels good to be back in victory lane,” said Logano. “I felt very confident coming into this race. I (said) we were going to win this week.”

Keselowski, Logano’s Team Penske teammate, finished 15th after being penalised for speeding off pit road during the final yellow. Penske had been on track for a 1-2 finish until then.

There was some big name casualties in the race with Dale Earnhardt Jr. classified last after he cut too low and hit the grass on the front stretch and then fired off into the outside wall. Jimmie Johnson, who was sitting-in behind, sustained front-end and windscreen damage from the debris from his team-mate’s incident. The other big name who failed to finish was Kevin Harvick who lost an engine.

Australia’s Marcos Ambrose finished back in 20th place after fighting balance issues which included the front of his car lacking front grip.