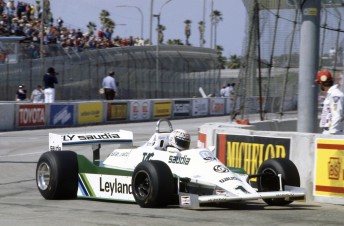 In the second of a five-part series celebrating this year’s 40th running of the Long Beach Grand Prix, we review how Alan Jones started the defence to his 1980 world crown in winning style.

A stern talking to from Williams chief Patrick Head was the catalyst for Alan Jones’ faultless drive to victory in the 1981 United States Grand Prix West at Long Beach.

The reigning world champion made the perfect start to his title defence on the street course which kicked off the 1981 F1 championship.

However, an entirely different result could have played out, if he had ignored his team’s wise words.

The Australian driver’s display for Williams threw the spotlight back on the racing after turmoil shrouded the sport in the build up to the event.

A row between F1’s French organising body FISA and FOCA, a group of the sport’s team owners, had broken out in the off season following the decision to outlaw ground effect cars.

Such was the vitriol in the power struggle between the teams and organisers, the previously planned season opener at Kyalami in South Africa was transformed into a non-championship race in which ground effect cars could enter.

As a result, Long Beach became the first official round of the season and the circus arrived to the west coast under a dire political cloud.

It was a feud that affected the whole sport.

Jones at the time accused FISA of orchestrating a conspiracy in favour of the French Renault team, but he later admits it didn’t affect his thought process heading into the event.

“Formula 1 has always had politics and you have got to be able to roll with the punches,” Jones told Speedcafe.com.

“It didn’t affect me at the time. There are only two blokes you have to please, yourself and the guy that pays your money.”

Eventually the racing forced the dispute to take a back seat and it was the unlikely Arrows of Riccardo Patrese that pipped Jones to pole in qualifying.

Williams team-mate Carlos Reutemann was poised to start in third.

However, Jones’ hopes of making a positive start to his title defence were very nearly over after near miss in the warm-up sparked some strong words from the team’s technical director Head.

Little did Jones realise at the time but it was these words which would prove crucial to his race.

“I enjoyed Long Beach because it was quite challenging,” added Jones.

“It was a tough circuit and it was a bit like Monaco (as) you couldn’t make any mistakes.

“I remember in the warm-up I slid a bit wide and scraped the rear left wheel with the barrier, which resulted in me getting a bit of a hiding from Patrick Head as he was a perfectionist.

“In the race, I guess it taught me to concentrate a bit more and hold it together.”

In the race, Ferrari’s Gilles Villeneuve made the best start from fourth and briefly held the lead before he out-braked himself at the first corner.

This allowed Patrese to assert himself at the front followed by Reutemann and Jones in third.

“I never had a plan,” added Jones.

“I was always head down, bum up and go for it. I worked on the premise that if you won Grands Prix, you won the championship.”

The order remained the same until lap 25 when Reutemann capitalised on Patrese’s misfiring engine to move into the lead.

Jones followed his team-mate into second and remained on his gearbox desperate for a way through.

While lapping the Ensign of Marc Surer, Reutemann ran wide and that was all Jones needed to slip through into the lead.

“I just had to get by him I was thinking and at any cost,” added Jones.

“I was hoping to make a move when I could and be close enough to him so I could take advantage of a mistake.

“He eventually did. It wasn’t a big mistake he only went wide for a second.”

While out in front, Jones quickly built a lead and made no mistakes as he took the victory from Reutemann by nine seconds, in what was the perfect start to his 1981 season.

“Absolutely, I just re-signed with Frank and to be able to go to Long Beach and win that race, I was stamping my authority on the situation.

“It was a great way to start the season.”

Jones recorded one more victory that year in Las Vegas as he finished third in the championship standings.

See below highlights video from the 1981 Long Beach GP