Weather good for ducks and not NASCAR

Weather good for ducks and not NASCAR 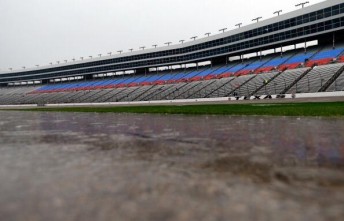 The NASCAR Sprint Cup race at Texas Motor Speedway will be delayed a day after persistent rain forced officials to hold the race over.

The Duck Commander 500 was scheduled for an afternoon start and even though Texas has lighting, the weather forecast remained bleak for the rest of the evening. The race will now be scheduled to start at midday Monday (2am Australian Eastern Standard Time) in Texas.

Ironically the weather is perfectly suited for race sponsor ‘Duck Commander’ which is the brand of a best-selling duck call.

Efforts were made all afternoon to dry the track with the Air Titan system, but cold temperatures and the damp air meant made all efforts fruitless.

Rain has been following NASCAR in 2014 with delays at Daytona and Bristol for the Sprint Cup, plus the Truck Series was postponed a day last week at Martinsville.

Tony Stewart will start from pole with Brad Keselowski alongside. Australian Marcos Ambrose will start ninth.