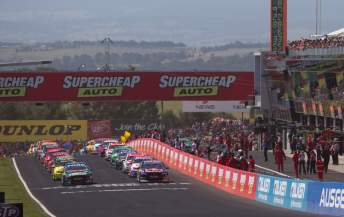 The Bathurst 1000 could return to a multi-class competition for the first time in 20 years this October, if a push from Dunlop Series competitors bears fruit.

Representatives from the second-tier series are preparing to present a proposal to V8 Supercars for the previous-generation machinery to compete in the endurance classic.

The move comes as a reduction in the V8 Supercars Championship’s grid size to 25 this year threatens to reduce the spectacle of the flagship event.

The category recently flagged hopes that a number of main series teams will field Wildcard entries, as Triple Eight did last year, in order to boost the grid.

While several outfits have expressed an openness to running an extra car, all are currently considered slim chances unless significant commercial deals can be struck in the near future.

The Dunlop Series proposal is expected to revolve around current full-time entries with drivers that have missed out on Pirtek Enduro Cup seats.

It is thought that at least five cars will likely be needed in order to sway V8 Supercars to allow the second class.

“There are people that want to do it and we’re preparing a proposal to find out if it can be a reality,” Russell told Speedcafe.com.

“We’ve already spoken to a few of them (main series team owners) and they think it’s got legs to go to a separate ‘class two’.

“It’d be a little bit back to the old days with a couple of classes but here the cars won’t be much slower, so the closing speeds won’t be that big.”

Although the move would marginally reduce the entry numbers for the Dunlop Series round supporting the Bathurst 1000, Russell says it could have far greater benefits for the series.

“When we’ve mentioned running in the main game at Bathurst, a lot of companies that won’t sponsor us in the DVS (Dunlop Series) are all of a sudden interested in putting money in,” he said.

“It (racing in the 1000) would help raise the profile of the DVS and could bring in sponsors for next year.

“We’ve just got to put it (the proposal) together within the next month and get an answer so that people can put together budgets.”

While there are now several spare Car of the Future cars that Dunlop Series teams could lease for the event, the cost or preparing and, potentially, repairing the newer cars is considered prohibitive for the second-tier outfits.

Under the terms of the Racing Entitlements Contracts that the main series teams hold, it is understood that V8 Supercars cannot offer direct financial incentives to attract Wildcard entries.

Matthew White’s MW Motorsport fielded a Bathurst entry the last time that second-tier teams were seen in the race four years ago, and is a clear potential starter again under the planned proposal.

“We’ve got a couple of drivers that’d like to be there, but we’d have to make it work for them and for us,” White told Speedcafe.com.

“Fundamentally, I think the more cars the merrier when it comes to Bathurst,” he added.

“It used to be 40 cars and really spectacular to watch. I think it could really work to the benefit of both categories.”

Aside from privateer awards, the V8 Supercars Bathurst 1000 last ran as a true two-class race in 1994, where both 5.0 litre and 2.0 litre cars competed.