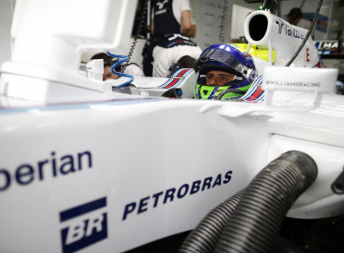 Brazilian Felipe Massa claims both he and Williams team-mate Valtteri Bottas should have been challenging for the podium in Bahrain.

Massa and Bottas ended an epic 57-lap in seventh and eighth places, held up behind the slower Red Bull of Sebastian Vettel.

Bottas had earlier failed to capitalise on a second row grid start when his machine scrabbled for traction off the line dropping him from third to fifth.

A badly timed safety car saw the pair drop behind the Force Indias of Sergio Perez and Nico Hulkenberg.

Massa enjoyed a solid start and assumed a strong track position before fighting tyre wear on the notoriously abrasive circuit.

“The safety car didn’t help the strategy as I think we should have been up with the Force Indias rather than behind the Red Bulls so that is a shame,” Massa said.

“Other than that it was a good race, with some good battles and to finish with both cars in the points is really positive.”

Williams’ head of vehicle performance, Rob Smedley said one of the priorities for the Grove team is to improve its race pace.

“There are many positives still to take, one thing we do need is a little bit more race pace,” Smedley.

“The team worked very well together from strategy to pitstops, the change over the last twelve months has been very encouraging.

“There is still a lot of work to do but I’m very impressed with the quality of people here.”