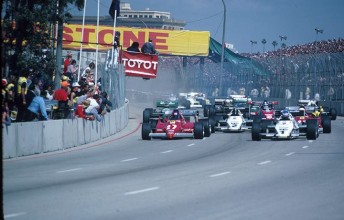 With Grand Prix of Long Beach organisers confirming it will establish a bidding process for the rights to the 2019 event, there is growing hope that F1 could return to the Californian venue.

IndyCar is poised to renew a contract which would take the American open-wheel show through until 2018 after which the door is open for negotiations to start with F1.

The famous street circuit hosted F1 from 1976-1983 before Indycar took over the running of the event.

According to American media reports, the possibility of F1 returning to Long Beach has been steadily growing ever since the sport’s commercial trump Bernie Ecclestone wrote to city mayor Bob Foster to relay his interest.

Since the correspondence, veteran event promoter Chris Pook, who organised the inaugural Long Beach GP in 1975, has been hired by Ecclestone to aid the sport’s return to the venue.

It is understood the race track would be required to undergo $9 million worth of upgrades, including a permanent pit complex and track extension, before it would meet F1 standards.

The 1980 world champion believes America is well equipped to host more than
one Grand Prix a year.

“I think it would be good to see F1 return to Long Beach,” Jones told Speedcafe.com

“At one stage America had two Grands Prix and I can’t understand why today there isn’t an American team and there are not more races held in the country.”

Ironically it is expected that NASCAR team owner Gene Haas is one of two new teams which will gain a green light to join the F1 grid as early as next year.

Jones’ thoughts are echoed by John Watson, the winner of the final F1 race on the Long Beach streets in 1983.

The five-time Grand Prix winner is adamant that Long Beach is the perfect venue for F1 in America.

“It is the kind of venue that if you want to go down the avenue of street tracks then Long Beach should be in the portfolio of a North American Grand Prix,” Watson told Speedcafe.com.

“First of all I always felt Long Beach was one of the great American race tracks and it had all the qualities of what a Grand Prix needs to have particularly in North America.

“If anybody asked me if I wanted to go back I would be the first in line to say yes.

“I do hope it comes because America needs more than one Grand Prix and maybe even three events.”

Meanwhile, F1 legend Sir Jackie Stewart, who spent 10 years commentating on motor racing in America, agrees the country should host another Grand Prix, but would prefer an event on the east coast over a return to Long Beach.

“I think America could afford another race and California more than anyone else but Austin Texas is doing such a good job,” triple world champion, Stewart told Speedcafe.com.

“It is a very good Grand Prix now.

“I would have thought it would be better to host another race on the east coast. America is a big country so there is potential.”

The Grand Prix of Long Beach is celebrating its 40th anniversary this weekend.

*Stay on Speedcafe.com this week as we roll out features running up to the venue’s important milestone.