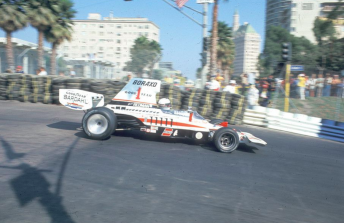 In the first of a five-part series celebrating this year’s 40th running of the famous Long Beach Grand Prix, we look back at how it all started with the first race in 1975.

From a travel agent’s vision to an event feted as one of global motor racing’s showcases, the Grand Prix of Long Beach came from humble beginnings.

The race held in sun drenched California brought Formula 1 to the west coast of America, before transforming into an IndyCar event that has struck a chord with the heartland motor racing folk.

While working Los Angeles, Pook had the foresight to convert the streets of Long Beach into a race track.

In 1975, Pook convinced the city officials to turn his vision into reality with the first incarnation of the Grand Prix of Long Beach.

Interestingly, the maiden event was for the hugely popular Formula 5000 cars held on the now iconic 3.2km picturesque waterfront circuit.

Englishman Brian Redman guided his Haas Racing Lola to victory in that first race, half a minute ahead of Australian Vern Schuppan in front of an estimated 45,000 crowd made up of motor racing fans and curious bystanders.

Quantified as a success, Pook wanted to grow the event and within six months a deal was struck with Formula 1 to host the inaugural United States Grand Prix West.

As a result, America became only the second nation to regularly host two Grands Prix in a season, with the sport already finding at home at Watkins Glen, in New York state.

The deal would bring the pinnacle of world motorsport to Long Beach, proving a huge gamble for Pook and his team.

To create an “American Monaco” in the salubrious seaside setting of Long Beach, was a plan critics thought would fail however Pook turned it into a success story.

Screaming V8 and V12 F1 engines thundered along the Long Beach harbourfront under sunny Californian skies – it had a touch of Monaco meets US about it.

Ferrari’s Clay Regazzoni had the honour of winning the inaugural United States Grand Prix West after dominating the race from pole.

McLaren’s James Hunt retired on lap four after Depailler controversially forced him into the wall at the turn 5 hairpin.

(Incidentally this was the season which the 2013 released movie Rush was based on the battle between Hunt and Lauda).

Englishman Hunt proceeded to shake his fist at Depailler every time he passed in the strike car for the entire race.

Although the first Grand Prix at Long Beach was a moderate success, Pook faced financial difficulties in the lead up to the 1977 edition with a pack of creditors snapping at his heels.

Desperate for a race to grab the nation’s media, his prayers were answered when the Italian-American Mario Andretti produced a remarkable drive to take victory.

With Andretti, who was already a folk hero in the US, winning on home soil in the manner he did, it made headlines across the nation and the world to Pook’s delight.

“It is one of the nicest moments of my career, even more satisfying than winning Indianapolis and really gratifying to have so many people pulling for me,” Andretti said.

While Regazzoni’s win put Long Beach on the map, Andretti’s triumph sowed the seeds for the events future.

“Mario’s victory really changed the whole image of the race,” says Jim Michaelian, now the President and CEO of the Grand Prix Association of Long Beach and the race’s financial officer in 1978.
“We made the New York Times, Sports Illustrated and the race was all over the local and national news.”
*Tomorrow: We relive Long Beach’s F1 days through the first-hand accounts of Alan Jones.