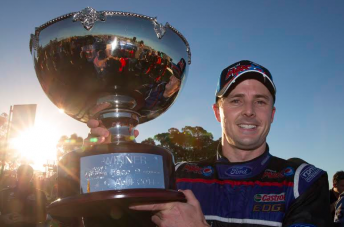 McLaughlin led the opening 20 laps from pole before the superior tyre life of the Ford saw the positions reversed.

The pair pitted together shortly after, where McLaughlin’s infringement would occur.

Winterbottom was then caught by Coulthard throughout the middle stint before they in turn pitted together for their second stops.

With less fuel left to drop, Winterbottom rejoined three seconds ahead, and then found himself managing a healthy gap back to Courtney once Coulthard served his penalty.

Winterbottom was almost 10 seconds to the good at the end of the 67 laps, which ran without a single Safety Car period.

“That’s awesome to have a pretty good weekend and to cap it off with that I thank my team,” said Winterbottom.

“They did an incredible job. Our tyre life was probably not as strong today as yesterday but we had really good pace in qualifying. Sort of changed our car a bit.

“That’s awesome and it’s awesome to see all the blue Ford blue flags. It’s been a little bit of a hard start, but it’s hopefully the start of many. We’ll try and keep coming.”

Tim Slade rounded out the podium, his first for Walkinshaw Racing, despite a pitlane drama of his own.

The Supercheap team was fined $3,000 and deducted 30 Teams’ Championship points mid-race after a wheel rolled down pitlane during the car’s first stop.

Jason Bright was fourth after surviving an early bump with team-mate Dale Wood, whose car eventually went to the garage with engine problems.

Coulthard and McLaughlin recovered to just 11th and 16th after their penalties.

Shane van Gisbergen was 12th after switching to a three-stop strategy while struggling for speed in the early laps.

The Tekno Holden slid from its second place starting position to 18th before pitting for the first time on just the seventh lap.

The Kiwi provided much of the entertainment in an otherwise sedate final 25 laps, charging back through from 18th.

Winterbottom now sits second to Lowndes in the championship standings after his victory.

See below results for Race 9