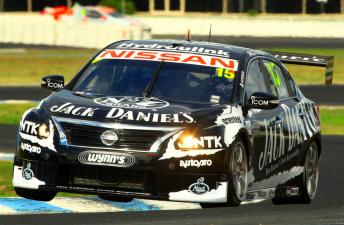 Rick Kelly believes that the speeding penalties are tarnishing the sport

Rick Kelly has called for V8 Supercars to review its method of policing pitlane speeding amid a torrent of team anger over penalties handed out during Race 9 at Winton.

Kelly and Ingall’s infringements were both recorded by the five metre timing loop at pit entry, while the remainder were directly from radar guns in pitlane.

While Ingall, McLaughlin and Coulthard were all shocked when informed of their penalty via team radio during the race, Kelly was particularly incensed.

Today’s events followed a similar punishment for the #15 Nissan during Race 3 of the championship in Adelaide.

“We’re dumbfounded as to how this keeps happening,” Kelly told Speedcafe.com in the Winton paddock this evening.

“There’s an issue and we need to get to the bottom of it. It’s really tarnishing the events from everyone’s point of view. Teams, sponsors, fans; it’s not what we’re after from racing.

“We’ve got multi-million dollar sponsors that are involved in the sport and we’re getting done for things that we can’t even see happened.”

Kelly suggests that a programming issue within the category’s control Electronic Control Unit is the only plausible explanation for the infringements occurring.

“I was extra careful on the pit entry, I slowed down well before the line and accelerated up to the pit limiter,” he said.

“How can we possibly get done if we’re accelerating up to the limiter on the entry? The category sets the limiter components of the race car. It’s not something we can play with.

“The only possible explanation is that if you dip below the speed limiter and accelerate back up to it, the car slightly goes over.

“But the data doesn’t show that. The data shows I was slower than our other team cars at pit entry.

“If there is a spike, it means every single car exiting its pit bay would go over the 40km/h and then should also have drive-throughs.

“My idea is that, in an incident like that which is questionable, it should be looked at afterwards,” he added.

“The data shows that it didn’t happen, but they can’t reverse a drive-through after the race.”

Separate to the speeding issue, teams were also left shocked by an unusual penalty issued during the race to Walkinshaw Racing after a pitstop infringement.

The team was fined $3000 and docked 30 Teams’ Championship points after a wheel rolled into the fast lane during Tim Slade’s first pitstop. Slade went on to finish third.

Red Bull Racing Australia and Jamie Whincup lost an almost certain Clipsal 500 victory just last month after a pitstop infringement, namely the car controller being deemed to have performed work on the car, resulted in a drive-through penalty.

“There’s something very wrong when we lost a race at Adelaide when Jamie was given a pitlane penalty,” said Red Bull team owner Roland Dane following the issuing of Walkinshaw’s penalty.

“Then you have got a similar infraction here during a pitstop and there’s a completely different penalty, which you would take every day of the week.

“I mean we would pay $3000 for a race win. That’s just utter madness. It just devalues the whole sport. Absolutely devalues it.”

V8 Supercars’ general manager of motorsport, Damien White, declined to give an immediate comment when asked why the two pitstop infringements had been met with such starkly different penalties.

A number of teams confirmed to Speedcafe.com that there had been no communication from V8 Supercars between Adelaide and Winton to indicate a new policy on punishments for such infringements.