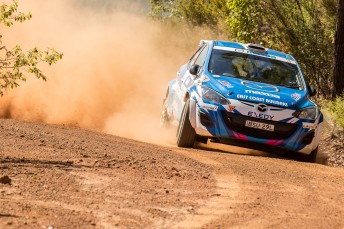 Brendan Reeves has won the Quit Forest Rally, the second round of the East Coast Bullbars Australian Rally Championship held in the towns of Busselton and Nannup in Western Australia.

After finishing second to Scott Pedder (Renault Clio R3) in Heat One of the event, Reeves (Mazda2) took the lead in Heat Two following mechanical dramas, which caused Pedder to miss a stage (SS16) late in the day on Sunday.

“We’re pretty excited to win the event, especially with all the small problems we’ve had over the weekend but that’s rallying, you just keep pushing on,” Reeves said.

It is the first time the Reeves and co-driving sister Rhianon Gelsomino have won the event and further extends their lead in the championship.

“It feels great to win the Quit Forest Rally, it’s probably the best-run event of the year and we’ve had a great time. The roads are a big challenge, I mean there are about five different surface changes in one stage alone but Rhianon and I had a great time,” he continued.

“To get nearly maximum points and to come out on top is a great feeling and we’ve extended our lead in the Championship again which is really great as well,” Reeves said.

“The next round is in Queensland in two months, so that’s a good break. This event has been pretty rough on the car as well so it will get quite a big overhaul, both the engine and gearbox will be out and checked and we’ll try and work on some set up things as well that we learnt from this weekend and just keep pushing the pace,” Reeves said.

Despite their issues Pedder and Dale Moscatt were able to finish Heat Two in sixth position and score enough points to keep them in the race for a podium finish. In the end the bonus point for winning the most stages during the event was the difference with Pedder/Moscatt finishing second outright.

“To win 17 out of 19 stages over the weekend and to not be on the top step of the podium is a bit disheartening but the Championship is far from over,” Pedder said.

“It’s good to bag some points, these are the sort of things that hopefully by the end of the year you look back on and say ‘it’s good we just kept on going’ and obviously it’s bad luck but hopefully the luck turns for us next event,” Pedder said.

Citreon DS3 R3T teammates Tony Sullens/Julia Barkley and Adrian Coppin/Tim Batten were locked in a tight battle across the weekend. After the two Heats they were locked on equal points but it was Coppin who finished third outright due to an overall faster time for the event with Sullens in fourth.

“It was all a bit confusing at the end of the day with Scotty (Pedder) coming back into the event, but it’s a great event for Citroen to get another podium and Tony (Sullens) finished strongly today as well beating us in the Heat, so it’s a good step forward for the team,” Coppin said.