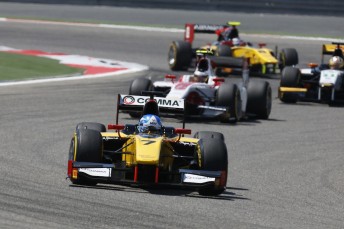 Jolyon Palmer leaves Bahrain with the lead in the GP2 Series

Jolyon Palmer has struck back to take the sprint race to complete the opening round of the GP2 Series in Bahrain.

Leal, who made a fine start, finished just in front of his team-mate Felipe Nasr while Stephane Richelmi (DAMS) was fifth.

Vandoorne (ART Grand Prix) was 22nd in the 23-lap sprint affair with Racing Engineering’s Stefano Coletti finishing 23rd after stalling on the grid and having to start from the pitlane.

Next Story FEATURE: Part 1 - How the Long Beach GP started