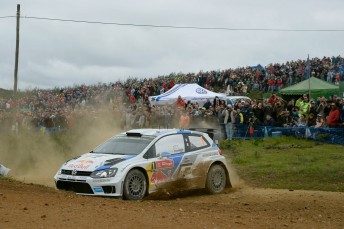 Sebastien Ogier has swept to victory at the Rally de Portugal in emphatic style winning the Power Stage to take maximum points.

After trailing on the opening leg, Ogier put the hammer down on the second day and through the final leg’s stages he was untouchable.

“So happy, really a great weekend and Portuguese Rally is the perfect place for us,” said Ogier after he finished the final stage.

“It’s my fourth victory here and it was not an easy one with Mikko putting on plenty of pressure on the first two days and was really fast. In the end another victory and taking the Power Stage is perfect.”

A tough final day for Hyundai with Dani Sordo retiring from fourth position on the road section heading to the day’s opening stage with a broken drive shaft. Then on the Power Stage Thierry Neuville damaged the transmission and completed the stage in rear-wheel-drive only and after spinning at a hairpin he dropped to a place to seventh overall.

After rolling on the opening leg Ogier’s VW team-mate Jari-Matti Latvala took second on the Power Stage with Ostberg third.

Australia’s Molly Taylor completed the JWRC  in seventh position after battling back from a tough second day with punctures. She was also eighth in WRC3 aboard her Citroen with mother Coral alongside.