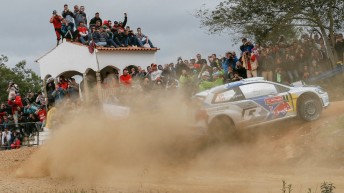 Ogier left the opposition in his dust

Sebastien Ogier has put the hammer down on the third day of Rally de Portugal to build a handy lead heading into the final day.

The Volkswagen Polo R pilot won five of the six gravel stages in the hills above the Algarve region to grab a 38.1 second initiative with just three short tests remaining tomorrow.

Ogier relegated Hirvonen from top spot in the second stage and ended the morning with a slender 2.4sec advantage. The world champion was untouchable this afternoon, reeling off three straight wins after opting for soft tyres on the drying abrasive roads.

“It was a great run and in the end I didn’t push so hard,” said Ogier. “We had good management of the tyres.”

Hirvonen used the same soft compound but his rubber was almost worn to the canvas. “I started to get scared we would get a puncture. I would have liked to carry the fight all the way through but we weren’t able to do it,” said the Ford Fiesta RS pilot.

Mads Østberg lies third in a Citroen DS3, 48.6sec behind Hirvonen. He replaced Ott Tänak in a podium place when the Estonian rolled his Fiesta RS in the morning, at the point where Jari-Matti Latvala plunged almost 200 metres down a hillside in 2009 after rolling 12 times.

Dani Sordo is fourth in a Hyundai i20 with Henning Solberg and Andreas Mikkelsen completing the top six, despite power steering issues for Mikkelsen this afternoon.

Martin Prokop is seventh ahead of Juho Hänninen, who dropped time with two punctures and a broken driveshaft.

Thierry Neuville was a comfortable fifth until he hit the rear of his i20 in the penultimate stage and broke a suspension link. He nursed the car through the final test but dropped more than five minutes and lies ninth.

Robert Kubica went off the road this morning and burned out the clutch of his Fiesta RS trying to regain the road. He won’t return tomorrow. Kris Meeke did not restart this morning after his DS3’s roll cage was damaged in yesterday’s crash.

Despite a puncture, Australia’s Molly Taylor completed the day in the WRC3 catgory in ninth place overall, but is just 75 seconds off sixth place.

Tomorrow’s final leg starts of three stages covers 43.87km before the finish. The final test is the Power Stage, with bonus points on offer to the fastest three drivers.