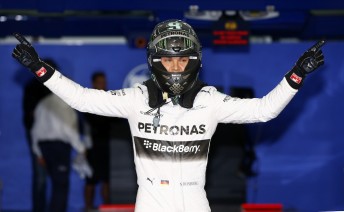 Nico Rosberg has turned the tables on his team-mate to secure pole position ahead of the Bahrain Formula One Grand Prix.

After taking the prime spot at the season-opening Melbourne round and last week at Sepang, Lewis Hamilton will start from second.

However Ricciardo is subject to a 10-place grid drop following his troubled Malaysian GP last week when his team released him from a stop unsafely.

Rosberg, though, has shown a distinct liking for the Bahrain layout which has proved a happy hunting ground for him in the past.

“I really enjoy the track and I won my GP2 Series title here so it has some pretty special memories for me,” Rosberg said after spearing to consecutive Bahrain poles.

“We’ve had a good weekend so far and I’ve been able improve my pace throughout the practice sessions so I was hoping for a strong qualifying.

“It’s so difficult to get everything completely right with all the new technology and set-up requirements on the car but I felt really comfortable this evening and was able to put some great laps together.”

Williams continue to show forward progress with Valtteri Bottas, fourth quickest but will be promoted to third with Ricciardo’s demotion.

Sebastien Vettel missed out on Q3 after being restricted to one fling in Q2 after being hampered with gearbox issues.

He was 11th but moves up to 10th with the penalty imposed on his team-mate.

Next Story New F1 teams floated as early as 2015