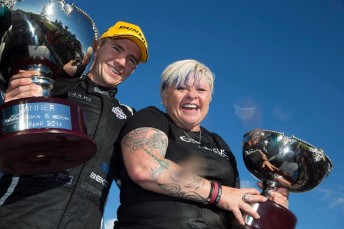 Betty Klimenko is confident that a maiden V8 Supercars race victory will have earned her self-funded Erebus Motorsport team respect from all quarters, including Mercedes-Benz.

Lee Holdsworth drove the team’s #4 E63 AMG to a popular win on Saturday at Winton, chasing down and passing the Holden of Fabian Coulthard in the closing stages.

The result comes less than two years after Mercedes-Benz Australia moved to block the property tycoon’s push to bring the brand into V8 Supercars as a customer of its German performance arm AMG.

With MBA’s reservations eventually cast aside at the behest of the Germans, Klimenko’s team started its campaign with an AMG developed package last season before taking its entire technical program in-house for 2014.

The move has greatly accelerated the team’s rate of improvement, with victory coming less than a week after team-mate Will Davison’s fourth place finish on Sunday at Symmons Plains.

The approval from AMG for a local takeover of the engine development followed the former Stone Brothers Racing outfit stepping in to solve many of the powerplant’s early teething problems last year.

“I’ve worked hard and I expect a little bit of respect for what we’ve done,” Klimenko told Speedcafe.com when asked if she hoped to be congratulated by Mercedes on the result. 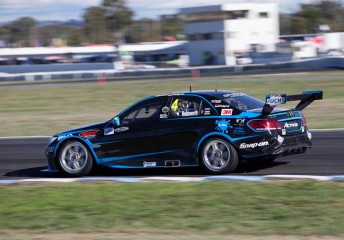 Erebus is running both cars without full-time primary sponsors

“You’ve got to distinguish between AMG, HWA (the racing department of AMG) and all those different brands,” she added.

“I can’t say enough about HWA and AMG. From Germany, it’s not their call weather they (MBA) support us or not, and they (HWA/AMG) have been amazing.

“They’ve tried their hardest. We’ve had our ups and downs, like any partnership, but I think all I will say is that we’ve proven that Australians know V8s.”

Klimenko was quick to cut-off any suggestion that proving itself as a race winning force could one day draw support from MBA.

“I’m a real loyal bunny. I’ve got fans out there that were there from day one. That’s more important.

“They hug me and thank me. If they (MBA) congratulate me I’ll take it with respect and with a smile, because I think I deserve it.

“If they don’t, then that’s fine, but I think they understand that it (V8 Supercars) is not what it was 10 years ago.”

Regardless of Mercedes’ stance, the win is a timely boost for Erebus as it continues to operate its two cars without naming rights sponsors.

Criticised last year for not respecting the backers her team had inherited from its former SBR guise, Klimenko insists that Erebus must establish a commercial presence in order to exist in the longer term.

“I was told by the V8 (Supercars) people that you can’t go out with black cars,” she said of the blank panels seen during recent events.

“But people have to know that the area is available. I have to run this as a business, I can’t keep privately funding it.

“I could be hit by a health food bus tomorrow. I want them (the team) to be able to go on and on and on. Hopefully I’ve set it up in a way that it will continue.”

From a personal perspective, the 55-year-old grandmother was revelling in the near constant stream of congratulations from rival teams in the paddock on Saturday evening.

“This year is better than last year, where it was often a bit condescending,” she said of her acceptance in the paddock.

“They’ve learnt that they can’t just pat me on the head and that I’ve earnt their respect. They don’t ‘genderise’ me anymore.

“One of the first thoughts that went through my head (after the victory) is that I’m the first woman team owner to ever win a V8 Supercar race.

“None of these guys can ever take that away from me. That’s a really cool thing.”

The V8 Supercars will be back on track at Winton today with qualifying and the 200km Race 9.