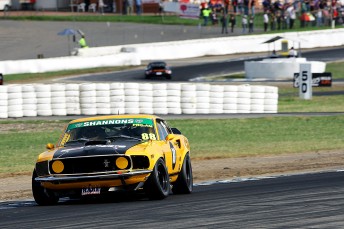 Tony Karanfilovski took his second race win of the year, while the master, Jim Richards won the final ENZED Touring Car Masters race of the weekend at Winton.

Karanfilovski had not won a TCM race prior to the 2014 season commencing at the Clipsal 500 Adelaide in March and now he has two wins to his credit. The Ford Mustang Trans-Am driver charged from fourth to second on the opening lap of today’s reverse top-10 affair and when Brett Youlden’s HQ Monaro spun a power steering belt and retired from an early lead on the third lap, he assumed a lead never to be lost. 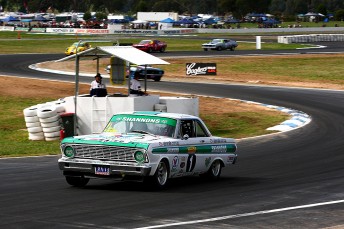 Jim Richards the winner in the afternoon

After making what he described as a ‘fundamental mistake’ in race one yesterday – he missed a gear whilst running third, causing the car to stall and drop five places – the victory was a sweet redemption for the NSW-based driver in a weekend that has seen them factor in the top three in each session.

Karanfilovski controlled an entertaining race that saw the remaining positions inside the top ten chop and change for a majority of the 10-lap duration.

Yesterday’s winner John Bowe started tenth and was running fourth before a last-lap altercation between Keith Kassulke and Andrew Miedecke saw the pair collide at turn one; both running off the road and allowing Bowe to sweep through to second position.

In the final race of the weekend Richards made a strong start from the front row of the grid and leaped into the lead, as pole-sitter, Bowe, was slow away and dropped to fifth place – where he would stay. Eddie Abelnica pressured Richards for the duration and finished second, with Tony Karanfiovski third and Andrew Miedecke fourth.

Next Story Monaro returns to TCM after major rebuild