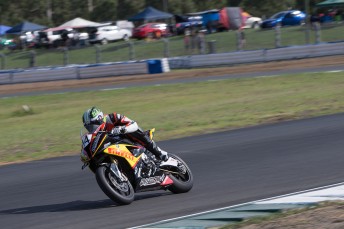 NextGen Motorsports Glenn Allerton has speared to victory in the opening round of the Australian Superbike Championship at Queensland Raceway.

With a late thunderstorm drenching the circuit, the final Superbike race was abandoned due to the dangerous conditions.

Allerton also took a clean sweep of the EVO Unlimited class but came under fire from a reinvigorated Phil Lovett, who set the fastest lap time of the final race.

Lovett diced with Allerton over the final laps, the veteran racer passing the BMW rider before being passed back on the final lap.

While disappointed that the final Superbike race was abandoned Allerton said he had enjoyed the weekend.

“It was disappointing that we couldn’t run the final Superbike race but there was just too much water on the track,” Allerton said.

“I had really good weekend and we made a lot of gains. I am sure the spectators enjoyed it, as there was some great racing across all the classes.

“Now we need to keep the ball rolling as we prepare for Darwin. I am really looking forward to that event especially as we will race alongside V8 Supercars.”

The final 17-lap race, which was reduced to 15 laps after a red flag four laps in, also saw the start of the stormy weather that brought a premature end to the day.

“That final Supersport race was awesome, it was so close between myself, Aiden and Callum,” Falzon said.

“It started to get really windy out there which was upsetting the bike a bit and took me a little while to get a handle on.

Queensland schoolgirl Tayla Relph provided the upset of the day, proving consistency is the key to the top step of the dais.

Relph, who finished the four Moto3/125 races third claimed the overall round win after Lachlan Kavney and Callum Barker both failed to finish races across the weekend.

Craig White stormed to victory in the combined Production /Formula 400 class but it was Western Australia’s Jessica Derrin who took the round win in the 250 Production class.

The next event sees the Australian Superbike and Supersport championships head to Darwin’s Hidden Valley on June 21-22.

EVO Unlimited Standings (top 10) after Round 1

Australian Moto 3/125 Standings after Round 1