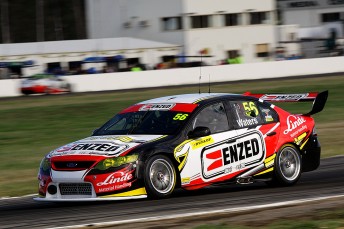 Cam Waters has dominated the opening race of the Dunlop Series at Winton.

In what would have to be one of the most dominant performances in the second-tier V8 Supercar series of recent times, Waters streaked away from second on the grid and never looked back over the 25-lap journey.

His final margin of victory was 10 seconds and allowed him to look after the car and will be hard to stop in the final race tomorrow.

Waters got the jump from Ash Walsh and Andrew Jones, while pole sitter Steve Owen slipped back to fourth.

Owen soon moved ahead of Jones, who then had a race-long battle with Paul Dumbrell. Things got interesting when Morgan Haber joined the battle and then Paul Morris got in on the action battling with Dumbrell.

Jones kept his nerve at the head of the battle pack to finish in fourth, while Morris was unable to get by Dumbrell over an intense final 10 laps.

Owen made a strong move on Walsh with five laps to run, making contact on the final corner. Owen’s final margin only made a little closer with Waters having to battle with lapped traffic.

Unlike the main series race, the Dunlop V8 encounter was an all-green affair with only minor incidents throughout the 25-lap encounter.