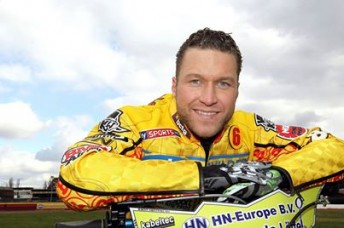 German Martin Smolinski has won his first ever Speedway Grand Prix at Auckland’s Springs Speedway  in what is already being lauded as the best final in the 20 year history of the SGP era, whilst Australian Darcy Ward was concussed in a heat 12 incident.

Smolinski was a clear last two-and-a-half laps into the contest, however stuck his bike on the pole line that worked for him for the majority of his heat races and let the race play out in front of him.

Working his way into second in front of the flu-riddled Kryzysztof Kasprzak, Smolinski showed no nerves in chasing down three-times World Champion Nicki Pedersen. With Pedersen hanging his bike wide, Smolinski stuck to his guns and was able to take an against the odds win.

“I win my first ever GP and it is unbelievable,” the beaming Smolinski enthused to the capacity Springs Speedway crowd.

Without question, the four best riders made it through to the final. Pedersen was undefeated throughout the qualifying heats before showing chinks in his armour in the semi-finals where he had to aggressively block Australian Chris Holder on the final stretch to take the second place.

Kasprzak, despite dry-retching after each of his rides due to the ‘flu he was suffering, put his illness behind him to lead the early stages of the final, whilst the dramatically fitter Lindgren showed the benefit of a huge off-season to run fourth in the unbelievable final.

It was a mixed night for the three Australians with most concern centring on Ward. He was t-boned by Smolinski on the final corner of the 12th heat, the German gaining unexpected drive through the turn and left with nowhere to go but into the Queenslander.

Ward slammed his head and shoulder hard into the Springs’ shale and was knocked unconscious. With paramedics applying a neckbrace, he was conscious as he was taken to hospital, however no further information was available on the double Under-21 World Champion’s condition. It was the third heavy crash Ward sustained on the night, suffering two crashes in the attempts to get his second round heat underway.

Holder was stunning in his Grand Prix return, making it into the semi-finals. He blasted past Pedersen before the surprisingly relaxed Dane smashed past Holder with inches to spare in the run to the chequers – showing all the guile that led World Champion, Tai Woffinden declare Pedersen was an ‘idiot’ in the NZ press during the week.

Troy Batchelor had a steady start to his fulltime Grand Prix career, showing there is room for improvement – ending the only Antipodean Grand Prix with four points.

The massive local crowd – easily the biggest in the three years of the NZ SGP – had plenty to cheer about early with the performance of Wildcard Jason Bunyan. He secured a career best two points overall and was unfortunate not to end with a second place in his opening ride, dropping back to third on the final lap.

Pedersen leads the World Championship on 19 points, some two points ahead of Kasprzak and the man of the moment, Smolinski third.

Holder is fifth in standings, some eight points off the lead, whilst Tai Woffinden managed seven points complete with a back injury. Ward (5 points) and Batchelor (4 points) sit 13th and 14th respectively.

Next Story Vandoorne spears to maiden GP2 win in Bahrain