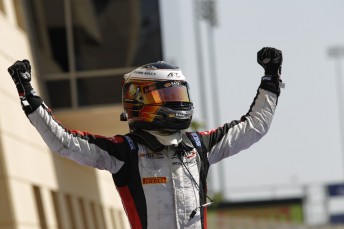 Stoffel Vandoorne, McLaren F1’s next star-in-waiting, has claimed a thrilling rookie win in the opening GP2 Series race in Bahrain.

Vandoorne, runner-up in the Formula Renault 3.5 Series last year and McLaren reserve driver in 2014, has stamped himself as one of the favourites to claim the title.

Off the start, Vandoorne managed to get the better of Palmer before being coached to perfection by his engineer in a controlled performance to kick off his GP2 career.

Leal managed to come from outside the top 10 to secure his podium result, surprising himself and the Carlin squad.

“I started from 12th position so I wasn’t really expecting to be on the podium today,” Leal said.

“But we knew that our pace was good throughout testing. It’s great that we were able to replicate that and get here today.”

Kiwi Mitch Evans, who at one stage was running as high as fourth, finished 14th, one position in front of his Russian Time team-mate Art Markelov.

Trident’s Axcil Jefferies had a huge shunt on lap 2 but managed to escape uninjured after fighting for position with Kimiya Sato.