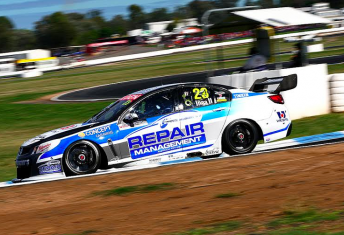 Russell Ingall’s torrid day at Winton has taken another twist with CAMS stewards set to investigate comments made by the veteran following Race 7.

Ingall launched a tirade of abuse at the stewards on the Seven Network’s television broadcast after the first of the two 100km races.

The former V8 Supercars champion had been on course to take Lucas Dumbrell Motorsport’s first ever podium when he was handed a drive-through penalty for earlier contact with David Wall.

With access to multiple camera angles of the incident, the stewards had decided to act immediately, rather than undertaking a post-race investigation.

Ingall referred to officials as “dopey idiots” and “peanuts” during his outburst, while adding that he’d “like to take them (the officials) over to all of those spectators” because they would “kick the s*** out of them”.

The V8 Supercars rule book makes specific reference to conduct that may be seen as “prejudicial to the interests of any meeting” and “likely to bring the sport of motor racing into disrepute”.

The regulations also state that “a person must not by words, acts, or omissions abuse, intimidate or threaten any other person.”

Although public comments against officials have traditionally been met with fines, the possible penalties include exclusion from the race result.

Ingall emerged from his drive-through penalty in 15th position before charging through to 10th by the finish.

The action-packed day ensures that a decision on Ingall’s fate may not be made until the morning.