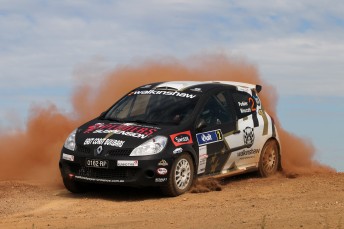 The Renault Clio of Pedder was untouchable in WA

Scott Pedder has won the opening heat of the QUIT Forest Rally from championship leader Brendan Reeves in Western Australia.

Pedder arrived at the end of day service claiming that “It’s nice to win something for a change” after having held archrival Reeves at bay throughout the day.

“It was tough out there today, and we’ve had a few little worries towards the end,” explained Pedder. “I was committed from the first stage and overall we had a really good run throughout the day, although I was able to back off a little this afternoon.”

Pedder started the day with a 1.1 second lead over Reeves, after the Renault driver claimed both wins around the Trade Hire Super Special Stage in downtown Busselton. He then extended that on today’s opening forest stage, to lead by 5.4 seconds.

Reeves was complaining that the grip levels he was experiencing in his Mazda2 were holding him back. “First up this morning it was very loose, and on the second stage I didn’t have a good feeling and I was using a bit too much brakes.”

Both Razvan Vlad and Mick Patton had bigger issues, Vlad crashing heavily off the road after reportedly misjudging a fast corner over a crest. The FIV medical crew was dispatched after Vlad’s co-driver, Daymon Nicoli, reported back pain and he was taken via ambulance to hospital for precautionary scans.

The heat on Mick Patton increased dramatically when his Volkswagen Polo caught fire mid-stage, an electrical connection believed to have sparked the instant inferno that engulfed the bumper and front end. The blaze was quickly extinguished, but Patton will have a lot of work ahead to restart for tomorrow’s second Heat.

By the midday service Pedder and Reeves were sitting almost 20 seconds apart, while the battle for third and fourth had intensified with the Citroen pairing of Tony Sullens and Adrian Coppin separated by less than 10 seconds.

Straight out of service Pedder opened the taps and grabbed a further 7.6 seconds over Reeves, who was himself concerned about an engine noise from the Mazda2.

While Pedder was edging away from Reeves, Adrian Coppin had made wholesale adjustments to his Citroen’s suspension and found the renewed confidence he had in the car had propelled him from fourth into third, and ahead of team mate Sullens.

“I almost had an off,” exclaimed Sullens. “Then I thought we had a flat, so I’d backed off. All the excuses of course!”

By the final two stages of the day, the two short blasts around the Nannup Oval, Pedder had opened a final gap of 32.8 seconds, and arrived back into service beaming.

“I had to concentrate pretty hard today, I didn’t want to make any mistakes, yet I also wanted to ensure we had plenty of stage wins,” Pedder said. “It was close at times today, I love that we can get to a stage end and only be a couple of seconds apart.”

“We had a few small concerns though, it wasn’t an entirely trouble free day. When we came out of the Ferndale stage the second time the engine wouldn’t rev and it was coughing and spluttering like it was running out of fuel. We did an ECU reset and it solved the problem straight away,” Pedder added.

Reeves, despite the gap to Pedder, was happy to have secured second today and the points on offer. “I’ve never fought for a Championship before, so today I really had to keep reminding myself to think about what’s at stake,” he commented.

“Because we had the concerns with the engine noise I really didn’t head out this afternoon thinking I’d push, so we re-ran the same tyres from this morning. It means I’ve got two brand new ones to use tomorrow, and that may play to our advantage.”

Third placed Coppin was thrilled to have refined his car during the day, and said he now felt comfortable to push. “Once I had that confidence back I knew I could start to push, and it felt good.”

“I was especially happy to claw that time back from Tony (Sullens). We’ve lived and learnt today and for me that’s positive progress,” Coppin continued.

While Coppin had improved the handling of his Citroen, Sullens felt he’d gone in the opposite direction. “All credit to Adrian, he drove the wheels of and hosed us on the last forest stage.”

An entirely trouble free day netted Alan Roe fifth in his newly developed Ford Focus ST, while Sean Keating battled home in his Nissan Silvia to finish sixth despite rearranging the suspension on the drivers side after misjudging a jump.

In the 4WD National Rally Series, local ace Tom Wilde had held over a minute lead up until the final forestry stage when he misjudged a fast entry to a slow junction, spearing his Mitsubishi Lancer Evo 9 off the road into the undergrowth.

To add insult to injury the Subaru Impreza of Bradley Markovich, running a few cars down the road, also ended up following Wilde off the course managing to back into Wilde’s stricken Lancer.

This allowed 18-year old sensation Dylan King to take a comfortable victory in his Subaru Impreza, over 2 minutes ahead of second placed Robert Webber.

A drama filled day in the Side-by-Sides, at least for Michael Guest, who watched Cody Crocker disappear into the sunset while he was beset with a raft of technical problems.

“It’s been a terrible day!” fumed Guest. “We broke the exhaust on the third corner this morning, which broke out the oxygen sensor, so the engine ran with no power. Then we broke a rear CV joint, which left us with one-wheel drive, which is a handful to control at speed!”

For Crocker the day was largely trouble free, a slight off road excursion on the opening stage his only concern. “Everything went to plan today, well except for the off road bit,” he laughed.

“The new car went really well, although it’s a bit heavy at the moment, but that just gives us something to work on to make it a bit lighter,” Crocker added.

Nathan Chivers finished third, behind Crocker and Guest, while Alan Grier rounded out the SxS in fourth.

Drivers complete a two-hour service in the township of Nannup before returning to Busselton for one further 4.91km blast around the all-tarmac Trade Hire Super Special Stage. Tomorrow then continues with a further eight forest stages before the winner is crowned back in Nannup.