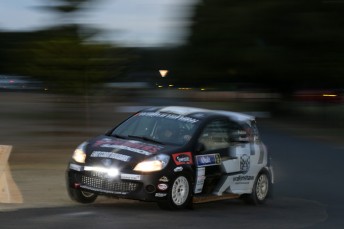 Scott Pedder has got the jump at the 30th QUIT Forest Rally heading the field after the opening two seaside stages at Busselton in Western Australia.

Pedder continued his winning form from the morning’s ARMOR ALL Power Stage by claiming both evening stage wins around the Trade Hire Busselton Super Special Stage.

Pedder powered out of the blocks in twilight conditions to take the first stage by 0.9 seconds ahead of second placed Brendan Reeves, while local ace Sean Keating power slid his rear-wheel drive Nissan Silvia into third place.

On the second run, in proper darkness, Pedder edged Reeves out by just 0.2 seconds, to lead by 1.1 seconds overall.

Keating stumbled slightly, only fifth place on the second stage to slip to fourth, allowing Citroen’s Tony Sullens to improve to third. Having struggled significantly during the morning’s Power Stage Sullens would be happy to enter Saturday’s forestry stages just 5.2 seconds adrift.

Sullens Citroen team mate Adrian Coppin though had a disappointing night, down in seventh behind Alan Roe and Mick Patton, over eleven seconds off the outright pace.

The continuation of the opening leg will be over eight Special Stages, including two passes over the mammoth 28.21km Ferndale stage outside Nannup.