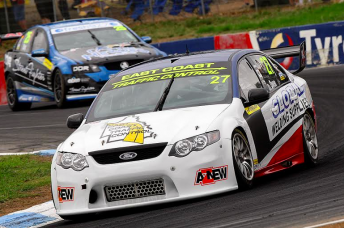 Steve Owen scored pole on his return to the Dunlop Series

Steve Owen has made an impressive return to the Dunlop Series, scoring pole position for this afternoon’s opening race of the weekend at Winton.

The Ford Performance Racing endurance co-driver is competing with MW Motorsport this weekend after a deal was completed on the eve of the event.

Owen sat seventh with just a minute remaining in the 15 minute hit-out for the top 50 percent of the field.

He then jumped to the top with a 1:22.97s, which proved a full 0.5s faster than the quickest man to that point, Cameron Waters.

The lap was also beneath the Development Series qualifying record that had stood since 2004, backing up record-setting track conditions seen yesterday afternoon.

Waters, who had run off at Turn 1 on the first lap with his final set of tyres, responded with two late efforts that drew the Enzed FPR Ford to within 0.1s of Owen.

Morgan Haber will start third after an impressive run that briefly saw the second MW Motorsport Ford looking set for the front-row.

Andrew Jones was the first of the Holdens in fourth ahead of Ant Pedersen, Ash Walsh, Paul Dumbrell, Andre Heimgartner, Chris Pither and Paul Morris.

The first segment of qualifying was immediately red flagged after a mechanical problem for Jordan Ormsby’s THR Holden as it exited the pits.

The ex-Kelly Racing Commodore spread oil along the pit exit and into Turn 1, with the resulting clean-up and retrieval of the car halting the session for seven minutes.

The first of two 25 lap Dunlop Series races for the weekend will take place at 1515 local time.

Next Story Waters leaves Dunlop opposition in his wake