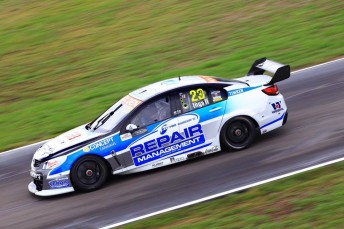 A furious Russell Ingall slammed V8 Supercars officials as “dopey idiots” after a drive-through penalty cost the veteran a podium finish in Race 7.

Ingall had used a mid-race Safety Car to take on fresh tyres, subsequently scything from the back of the field to third.

The Lucas Dumbrell Motorsport Holden was forced to serve a drive-through penalty with three laps to go, however, after Ingall had tagged David Wall into a spin during his charge.

Although a penalty appeared inevitable after the touch, Ingall blasted officials post-race, claiming the incident should have been assessed after the chequered flag.

“This is what I get with this category. Dopey rules made by dopey idiots,” he told the Seven Network.

“It’s alright for these peanuts to sit up in that ivory tower of theirs and just hand out punishments like that, towards the end of a race mind you.

“They dudded us last meeting, when they gave us a penalty (during the race), when they did everyone else’s after the event.

“So instead of looking at what went on… look at it afterwards and then judge it. Don’t just fire one out and totally screw a good race for us.

“We had good strategy, good car speed and you don’t get that sort of thing too often. Geez, it annoys me.

“I tell you what, I’d like to drag those guys down and take them over to all of those spectators over there and see (what they think about it).

After viewing replays of the incident, Ingall was adamant that Wall should have given way.

“There’s no doubt I gave him a bit of touch-up going-in, but I’ve dived down and he’s decided to stay where I am,” said Ingall.

“Now I’m two seconds a lap quicker. For god’s sake his team would have notified him and said ‘hey mate you’re dead – you’re better off just letting him go and get on with it’.

“But no, he wants to fight to the death and I gave him two corners and wasn’t going to give him three. So inside, if he wants to turn-in let him go.

“That’s the sort of thing that should have been judged after the event.”

Ingall will start this afternoon’s second race from the back of the grid after steering problems kept his car out of the morning’s qualifying session.