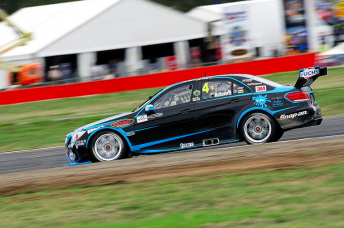 The #4 Mercedes-AMG was second fastest at the end of Friday practice, just 0.3s adrift of Holden pace-setter Fabian Coulthard.

The Tasmanian venue was expected to be one of the E63’s weakest tracks as the team continues to chase horsepower.

The tight confines of Winton, however, appears to suit the team’s package following extensive suspension work over the off-season.

“We’ve certainly got a lot more speed and consistency in our cars and we’re waiting our turn, I guess.

“We’ll wait and see, but it (winning) is certainly a possibility.”

Holdsworth sits 13th in points after six races, one place behind Davison, with a best race finish of 10th.

Qualifying speed has meanwhile been somewhat of a strength for the former Garry Rogers Motorsport driver this season, starting four of the six races from inside the top 10.

“We came out at Clipsal and showed that we had a much better car than we finished last year with,” he said, having made his first Top 10 Shootout with Erebus at the Adelaide event.

“Last year we improved it every time we got on track, but we made a big step forward over the break and came back with a car that we can qualify in the top 10 if we get it all right.

“We’re still a little bit off in some areas, but this is a track (Winton) that probably suits our car a little bit more. We’ve found a lot more front grip than last year.”

The Friday performance came less than 48 hours after the 31-year-old chased a would-be thief out of his family’s Gold Coast home.

Holdsworth denied that the incident would prove a distraction over the weekend.

“I think the experience at this level of racing allows you to switch the mindset when needed,” he said.

“I put the helmet on and it’s 100 percent all about making the car go fast.”

The V8 Supercars will return to the track at Winton for the first of two 10 minute qualifying sessions from 1100 local time.